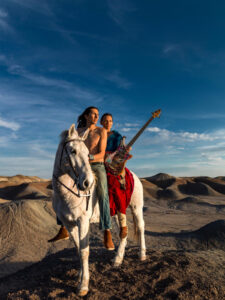 For three decades, brother and sister Jeneda and Clayson Benally have been recording and touring bringing their empowering, organic, conscious-raising, charged music to communities throughout Europe and North America. Multi-award winning musicians from the (Diné) Navajo Nation in Northern Arizona create an explosive duo of bass, drums and vocals with a traditional Navajo backbone bridging folk, rock, world, pop and a little punk. Sihasin comes from a long tradition of protest music and espouses traditional Navajo values to their audience. Sihasin is a rare band that does more than just perform—they leave their audiences with an exhilarating feeling of hope and respect and cultural appreciation.

Sihasin has been featured in The London Sunday Times, NPR’s All Things Considered, Arizona Highways, PBS, ABC, and many more. The duo has recently performed at the Kennedy Center, Grassroots Festival, The Museum of Native American History, Globalquerque, SXSW, WorldFest, The Woody Guthrie Center, and many more. They are looking forward to continuing to tour the world bringing their message of hope, respect, and understanding.